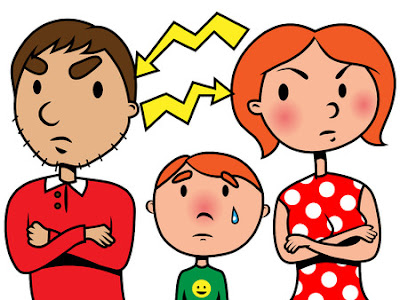 Even the most amicable divorces can be a nasty business.  Even when couples try therapy and the marriage still doesn't work out, the situation can many times turn negative quickly.  Children often suffer the most. They might wind up being pawns of each parent against the other. They might also simply be emotionally scarred because one parent is no longer in the household. There is also the social stigma attached to divorce under which children must suffer. Every year, 1.5 million children go through this.

Parents should keep in mind that staying in a toxic relationship filled with frequent arguments could be more detrimental to a child’s emotional health than if their parents got a divorce (read more here.)

What is the Chief Cause of Conflict?

Primarily, infidelity.  It not only causes the most conflict but also the most intense conflict between parents (1) out of which the "... long-term consequences ... for children are pervasive ... and detrimental."[2] Dr. Shirley Glass, considered the foremost authority on infidelity in the world today, cautions that even happy marriages are not barrier to straying. Further, she declares that not all affairs are sexual, which changes the definition of what an affair is.

Co-parenting as a Solution to Conflict

Thayer argues that co-parenting from a mindset of peace is essential for the emotional development of the children involved in a divorce.[4] Garrity and Baris agree with her and reinforce the assertion that both defusing conflict before it happens and calming it once it does keeps children from, "... suffering harm from their parents' divorce."[2] Further buttressing the idea that conflict is a negative influence, JoAnne Pedro-Carroll states that parents must, "... gain a better understanding of what their children are experiencing, "... as a cornerstone to, "... reducing conflict with a former spouse," which is beneficial to children.[5]

Litigation vs. Mediation vs. Controlled Separation

Chiefly, litigation means going to court; mediation means not going to court.  In most cases, mediation is far less expensive and contentious than full-fledged litigation. Additionally, mediation is a sealed proceeding, which means that children can be shielded from it. A court case, on the other hand, might involve the children directly because they might be called upon to testify against one or the other parent. A controlled separation is different from any other divorce proceeding in that its end goal is saving the marriage.[6] Because the conflict in such cases is far less than in contentious, or even knock-down-drag-out divorces, not only is it less stressful for the children involved, but it also has become increasingly popular in the 21st century.