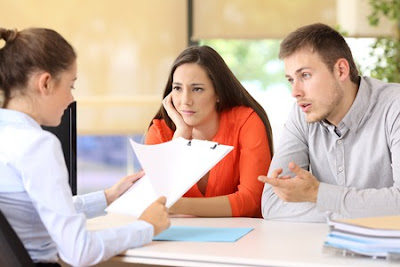 Divorce can be a muddled, messy process. When couples decide to go the traditional route, the road is usually filled with months of contentious court battles and thousands of dollars in attorney’s fees. When the dust settles, all that is left is animosity and resentment. Often there is irreversible damage to the relationships between family members, particularly the children.
Because of the high emotional and financial costs of traditional divorce, many families are turning to divorce mediation as a healthier alternative.  Through mediation, couples are able to work out their disputes with a neutral third-party mediator as their guide. Together, they work to create a legally binding divorce agreement that works for both parents. This option is often much cheaper and less emotionally harming than hiring separate attorneys to “duke it out” in the courtroom.
Though mediation has been around for some time, many people are still misinformed about how it works and the potential benefits. Couples are often hesitant to agree to speak with a mediator because of inaccurate information they have received about the process. Unfortunately, these myths lead families missing out on the opportunity to solve their problems amicably.
Myth #1 We Can’t Communicate = We Can’t Mediate
One of the most common reasons people toss the idea of mediation to the side is that they falsely believe that only “friendly” parties can use mediation. This is not the case. Your divorce does not have to be simple to benefit from mediation. Complex cases are often better served through mediation since a skilled mediator is able to keep conversations focused. Couples in mediation are steered away from fighting the same old battles. Instead, they are encouraged to find common ground for the good of the children.
Myth #2 I’ll Have to Settle for Less
Another reason mediation is avoided is the fact that parties often think they must “win” and negotiating with the other party eliminates their ability to do so. But unlike other aspects of life, divorce is not a “take-all” sport. Statistics show that in general, negotiated cases and those who allow a judge to rule have similar end results when it comes to who gets what. The difference? With mediation, you’re not losing thousands of dollars in expensive attorney fees.
Divorce mediation statistics also show that a majority (two-thirds) of parties walk away from mediation feeling satisfied. This is much higher than those who go through a legal judgement process.
Myth #3 Divorce is Much Cheaper
Which leads to a third myth, divorce without mediation is much cheaper. In reality, this couldn’t be further from the truth. Mediation prices vary, but in general, mediators charge a set fee for a particular number of sessions and additional fees are minimal. Unlike attorneys, there is no hourly rate that continues to bill for every phone call or paper printed during the session. Often parties that go through traditional routes are horrified when they realize that the $299 divorce they had hoped for has now spiraled into a complex case attached to a lengthy attorney bill and thousands in court fees. If you’re concerned about price, check out this comparison page.


If you’re interested in mediation and wanting to know more about the benefits, visit the mediation section of our page and download our guide for shared parenting.